Alexis Ryerson is the one of the last humans alive and is 14 years old. She is a camper and a member of Dissideffor.

Alexis has very light complexioned skin, and dyed medium-length pastel pink hair. She is short (5'3) and slightly chubby, and usually wears all black, with the exception of her hair. She has a favorite pair of combat boots that she never takes off, and has very dark brown eyes and light freckles.

Alexis is funny and easygoing, but she is angered easily and has a hot temper. She is extremely smart, almost a genius, and can solve problems easily. Alexis can be a bit of an adrenaline junkie, and will take on any dare no matter how dangerous, since she isn't really afraid of anything. Being a big risk taker often gets her in trouble, and she can be considered a troublemaker or bad influence. In addition she can also get very hyper and crazy. When she wants to be, Alexis can be viciously mean and rude, almost demon-like, but she is also very gullible and is tricked easily. She is very stubborn, and hates it when things don't go her way. She will often assume others know what she means, even though it makes no sense. Alexis is very loyal, and will do anything to protect her friends.

Alexis is a regular human, so she does not have any magical abilities. However, she is skilled with a sword and various other weapons like bow and arrows. She is also strong, both physically and emotionally. She also has the ability to withstand mind control because of her strong heart and stubborness.

Alexis and Arria have a very complicated relationship. To outsides, despite the fact that they tease each other and "fight" a lot, they are best friends. Arria was under Alexis's bed when she moved into Cat's cabin, and that is where she decided to stay. There is a bit of a romantic undertone to their relationship, and the two are sometimes found hugging or holding hands. Nobody really has the guts to ask what's up with them, but they aren't actually going out. Alexis knows Arria the best out of anybody, and would give her life to protect her or make her happy.

Cat and Alexis are extremely close friends. Alexis will often ask Cat for advice, and the two share a sister-like relationship. There really isn't any negativity or teasing between them, just friendly love and kindess. Alexis can get extremely protective of Cat, and Cat will sometimes team up with Hazard to troll or play a prank on Alexis, or just prank Alexis herself. Alelxis takes these pranks very lightheartedly, and sees them as a sign of their close friendship.

Hazard and Alexis have a complex and occasionally oppositional friendship. Alexis and Hazard and constantly bickering and teasing each other, but there is a lighthearted and loving undertone to her end of it. She deeply cares about him, but would die before showing it. Alexis nicknamed Hazard "the Murderer," and will often call him that when she is annoyed with him. However, Alexis and Hazard are actually very close.

Flambo and Alexis are on friendly terms, but neither is very close with the other. They will talk and work together, but aren't very good friends or know each other very well.

Lily and Alexis are good friends, but don't share a very personal connection. Majory of their relationship is based on joking around and being silly. Alexis cares for Lily, but isn't as close with her as Arria or Cat. The two will often pair up to prank Arria. Sometimes Alexis will call Lily her "comic relief random buddy."

Alexis and Oda Luffy are on very close and good terms. She knows him very well, and loves him a lot (platonically... for now). The two are often seen joking around, and have many inside jokes together. Oda is Alexis's best friend outside of Dissideffor.

Feron and Alexis are close friends, and often hang out with Oda together. Alexis is comfortable around Feron, and considers him a great friend and a funny and nice person. She occasionally teases him, but it is in an endearing way.   Like Alexis and Oda, she and Feron have a lot of inside jokes, and the trio is seen around camp together.

Alexis and Allie are good friends. They share a similar sense of random humor, and both can be very spazzy sometimes. While they don't really talk about serious things, Alexis trusts Allie very much. Alexis tries to help Allie control her powers, but still finds it hilarious when things accidentally blow up.

Alexis was twelve when The Glitch occurred. Her parents had some inside information on what was going to happen, because of their positions in the government. Fearing the worst, they sent her to a secret underground bunker that was far enough underground where the Glitch would affect her less. She was also in the percentage of humanity that wasn't affected at all. After food supplies ran out in the bunker, Alexis made her way up to the surface to face the new world, where she was faced with magic, altered humans, and monsters. Cat found her after she scared off a village and offered her a place in the fifth arc, where she now resides. 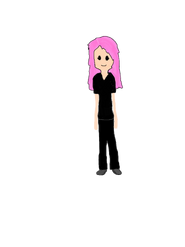 Alexis as drawn by FTHG 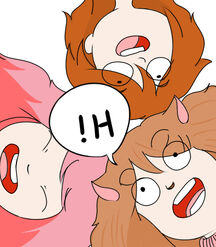