Allie McGrath is a 13 year old rookie wizard and camper. She is in the Dissideffor Arc and a camper at Camp Solace.

Allie has fair skin and short, blonde hair. Due to being a wizard she has small pointed ears. Allie usually wears a black t-shirt with a long sleeve light blue and white stripe shirt under, blue jean shorts, and blue sneakers.

Allie is described as chaotic neutral, being a tomboy, and may be weird. She is sometimes immature and annoying. Other then that she is mostly calm. She has a bad side too, mostly meaning she can get really depressed or serious.

Lily and Allie hang out a lot and have a interesting relationship. Some say that they are guardians of each other. Others ship them.

Cat is probably the nicest person Allie has ever met, being that she always helps her out. They share similarities and hang out a lot.

Allie and Arria are good friends. They help each other out a lot and do activities with one another. Arria sometimes jokes with Allie, or even scares her for the fun. They still enjoy each others company.

Though don't interact much, Hazard helps Allie out on some occassions. Even though in Senseless where Alexis suspects that he was going to murder Allie, he still respects her abilities and would call her a friend.

Alexis and Allie are good friends. They share a similar sense of random humor, and both can be very spazzy sometimes. While they don't really talk about serious things, Alexis trusts Allie very much. Alexis tries to help Allie control her powers, but still finds it hilarious when things accidentally blow up.

Allie is always playing around with Exus and teaching him things that end up getting them both in trouble, he thinks it's funny and goes along with it.

Feron is probably the person Allie hangs with the most when Lily isn't around. They always talk about nerd stuff and play around.

Being Allie's mind guardian, Maxwell gets quite irritated with Allie a lot. Allie however thinks Maxwell is annoying and points out the obvious.

Being a rookie and unskilled at magic, Allie is rather uncontrolled at her powers. She can only float (or fly) and throw lightning orbs. Being blind however, she can some how sense her surroundings and body heat.

Allie along with other campers 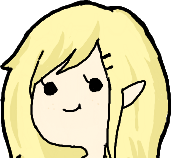