Arria Leviosa is a 15 year old vampire and camper. She is in the 5th Arc.

Arria is a 15 year old vampire-hybrid. Stands at 5'7, she has long dark brown wavy hair. She wears a camp t-shirt with jeans and sneakers. Arria has razor sharp teeth and light blue skin.

Arria is easy going and laid-back. She is always cheeky and can cheer anyone up. She is somewhat a daredevil. Has many close friends, who she sometimes wants to "have a little snack". Arria is dramatic and witty. Sort of a tom-boy, that always has at least one sarcastic joke to say. But if she has any sugar whatsoever, she is unbeliveably loud and hyper. Watch out when she has sugar, she's a real handful.

She goes about her everyday normal life, but only her close friends know that she could eat humans. 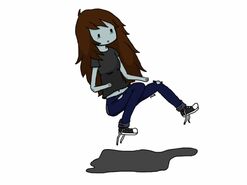 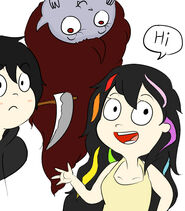