"First Day" is the first episode of the first season of Camp Solace.

After being kicked out of their arcs, Johnny, Arria, Lily, and Cat investigate a strange noise in the forbidden woods.

Kiri: You can't do this! Travis, i'm begging you!

Travis: I'm sorry but that prank was just too out of hand. Someone could have gotten hurt, and our arts and crafts shed is completely covered in slime.

Travis: Enough is enough, My decision is final.

Kiri: But my friends in Arc Three they'll- and I-

Travis: You can always meet them during activities, and you won't be in the new arc alone, if I remember correctly, Lily and Arria were involved in this too.

Johnny: Whats the deal Travis?! I was half way through the 5 mile run and I was gonna win if you didn't-

Travis: Shushers!!! This is an important meeting! Now, Take a seat and listen carefully. I established a new arc.

Travis: BUT this arc is going to do something different from the other arcs.

Travis: You see... there are some crimes happening. More than usual... I dont know whats up with that but I need a team that is capable of working together and can handle this. I also want you to explore unknown places to expand the camp. Can you do that?

Travis: Hahahaha. Yes. Get out now.

Travis: You heard me, get out. Leave my office.

Johnny: Well, there's enough cabins for each of us to have our own cabin.

(A noise is heard in the woods nearby)

Lily: Oh my glob. What was that?

Arria: (shrugs) Maybe it was your imagination.

Cat: Uh the problem is... we're suppose to stay in the Camp area.

Johnny: Aww c'mon dont you want to know whats in those dark, spooooooky woods? Or are you scared.

Cat: What? I'm not scared

(a guard walks up)

Lily: Going into the woods!

(everyone looks at Lily)

Guard: No way, You gotta tell me everything now! When are you going?

(The group are silent, sweaty, and clammy.)

Lily: But I thought we wer-- (Gets elbowed by Cat.)

Guard: Well, okay... but if I catch you guys outside of The Camp, you will have toilet scrubbing duty for a week!

(The group of chums go in the back of the Mess Hall Cabin, and put Arria as lookout.)

Arria: (Has binoculars.) Nope, the guards are too distracted by a bear-shark eating Jimmy.

Johnny: Awesome, we can now go. (Everyone goes except for Cat.) Yo, kitty cat! You coming?

(The group begins to head towards the woods)

Johnny: I can't believe Travis. He's kicking us out of our arcs just for having fun. Apparently I was sarcastic to my counselors one too many times. What'd you three do anyway?

Arria: (Giggles) It's kind of funny, really. We found this slimy little salamanders by the arts and crafts cabin, and decided to freak people out by putting them on their shoulders or something. Only, it turns out, once they're around people they explode into slime. It got everywhere, all over the cabin.

Lily:  (shrugs) It's not like we can have an arc with only four people anyways.

Cat: Well, with this camp, a bunch of other troublemakers should be joining us at any time.

(The group approaches the edge of the woods, and looks around at each other. They all head in)

Johnny: I've never been in here before.

Arria: Lily! Stop being so gross.

(The sound from earlier is heard again, to the right. The friends head that way)

Kiri: (Shivers from the cold) Are you sure we should be doing this? Whatever is making that noise sounds really big.

Lily: I am going to see what's making that noise and nobody is stopping me!

Johnny: Besides, if whatever it is tries to kill us, I can burn it with fire. (A ball of flames appears in his hand, and is shot against the nearest tree. The tree catches fire, and Johnny shrugs) Whoops.

(Once again, the sound is heard. It is much louder this time, and it sounds like some sort of animal)

Arria: (Pushes some tree branches out of the way) We're getting close.

(Suddenly, Lily breaks away from the group and runs ahead. They look around at each other in dismay, then sprint after her)

(Unseen, Lily's scream is heard. Johnny shoots a ball of fire through the trees in front of them, and they keep running towards Lily)

Unknown male: Dang, is it really necessary to scream or you know, throw fire at me?

(The group crashes into the clearing up ahead, where a shocked looking Lily and a boy with dark clothes and a hoodie covering his face stand before them. There is also a seemingly dead bear lying on the ground next to the boy)

Johnny: Oh, I know you! You're that weird creepy thing who everyone claims is a murderer and doesn't have an arc. (Cat shoots him a rude look) I mean, no offense.

Cat: Err, hi. I'm Cat, and these are Johnny, Arria, and Lily. Sorry for interrupting you.

Arria: We were here to investigate a noise!

Unknown male: Hazard. And the noise you heard was probably me knocking out this bear. It decided to interfere me after I came here from… nowhere.

Johnny: Well… it's been nice meeting you. (whispers out of the corner of his mouth) creepy dude. (Johnny starts to walk away from Hazard)

Cat: (Reaches out and pulls him back by the arm) Well, Hazard, since you don't have an arc and all, do you want to join ours? I mean, I know we don't really know you, but Travis sort of made a new arc out of the "misfit troublemakers" and we only have four people. You'll get to know us fast.

Hazard: Psh, I don't need one. I only come here as a duty to make sure people are safe.

Cat: Well, think about it, and let us know, okay?

(the group, minus Hazard, heads back towards the mess hall. The screen fades to black)

(the next day, a knock comes on Cat's cabin door. She opens it to find Hazard on the other side)

Hazard: I decided to accept your offer. I can better protect people from within an arc. I'm not in it for the friendship and whatnot.

Cat: (smiles) Great! There's an empty cabin across from me, as long as you don't want to room with Johnny… (her voice fades away and the screen goes black again, and the episode ends) 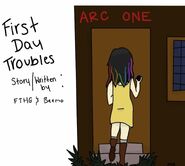