Lily Danger is a 15 year old humanoid. She is a camper and member of the Dissideffor Arc.

Lily has fair skin, and golden bronze, long, wavy hair. She usually wears it down, but on some occasions she wears it in a ponytail or a messy bun. She has ears resembling a cat's, which are a shade darker than her hair. Lily is 5'4, standing shorter than most of the other kids in her arc.

Lily has a multitude of different outfits. She is fond of colorful clothes, and especially likes pastel colors. She doesn't like outfits that aren't comfortable on her, and she isn't very fond of dressing up in formal clothes, either. Her style would be considered 'tom-boyish' sometimes, but she loves girly clothes, too. She isn't interested much in fasion, so she doesn't spend to much time putting together outfits. Her favorite color is pink, so a lot of her clothes contain pink in them.

Lily has a very hyperactive, peppy personality. She hates to be lonely, but that is pretty much the only think Lily could be able to hate. Lily is known among her friends to be honest; sometimes a little too honest. She often has trouble keeping her mouth shut if she is told a secret. She can be serious, but she thinks she is better off being as outgoing as possible. She may look like the kind of person who would back out of a fight from being scared, but Lily is a surprisingly good fighter. She learned from different experiences. Even though she is a good fighter, she still doesn't like getting into fights. She likes having a good influence on others. She will defend herself and her friends if she is needed, though. Lily doesn't get mad a lot, but when she does it is hard to settle her down. She tries to keep her anger contained all the time and keep a smile on her face. Due to being half cat, it is natural for Lily to act feisty at times.

Catherine took Lily as her prank twin. Most of the camp members refer them as Troll Duo, due to their work and action to prank people together. They pull pranks on almost every member in every arc, which gets them into trouble together, but they always take it as a worthy thing to do.

Lily has an odd relationship with Johnny. When on missions, Lily is often warned by Johnny whenever she gets obsessed on killing someone. As seen in "The Wizard and the Frog," it is shown that Lily is not bothered while kissing him, nor the vice versa.

Lily rarely talks with Arria. Even on important missions, they decide to reduce their conversation together. Even though they're awkward being together, they seem to like to help each other.

Lily and Alexis are good friends, but don't share a very personal connection. Most of their relationship is based on joking around and being silly. Alexis cares for Lily, but isn't as close with her as Arria or Cat. The two will often pair up to prank Arria. Sometimes Alexis will call Lily her "comic relief random buddy."

Just like the other members of the arc, Hazard is one of the prank victims of Lily. He gets pranked often, so sometimes he tries to bust her and Cat in their act. Due to Lily's obsession towards sharp things, Lily seemes interested on Picora's scythe.

Lily and Allie hang out a lot and have an interesting relationship  Some say that they are guardians of each other. Some campers ship them together. 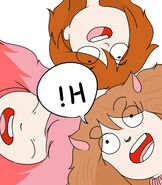