He's a humanoid with an average height. Hazard has messy black hair and he usually wears a dark grey hoodie with dark blue skinny jeans. He often hides his glasses in his pocket. When inside the arc, he can be seen wearing red camp T-shirt along with his glasses.

Almost in every event, Hazard wears a dark-grey hoodie along with blue jeans.

Usually, this attire is used in empty days and night time. He wears a grey T-Shirt and training breeches, he puts on his glasses, and a grey wool hat on his head.

This garment can only be wore by Spectre power. He wears an overly-knitted shirt and brown jeans, covered with big semi-visible robe. Oddly, his scythe will get bigger if he access this garment.

When he was a lone wolf, Hazard rarely talked to the others. He was hard headed and ignorant, but he has sense of honor towards people. His personality slightly changed after he accepted Karen Etch's offer to join the group. He speaks more often with the members and lost his hard headed trait towards the others. Even though he likes to speak with the other members, he uses sarcasm and proper words to gain their respect and trust.

As a 5th arc member, Hazard has helped the members on their work. But mostly his desire is only to protect them, especially Karen. He refers her as a mild-leader that will probably die fast. But it is shown on some episodes, Hazard puts his life to protect her and the arc from danger.

Hazard has a complex relationship with Alexis. They often argue and tease each other. Alexis refers Hazard as a murderer because of his gritty personality. However, Alexis and Hazard are actually very close. Hazard can act rough to Alexis, but not to the point of hurting her.

Johnny isn't holding any grudge towards him even though he's creeped out by him. Sometimes, Hazard tries to help Johnny reduce his bad perspective upon him.

Just like the other members of the arc, Hazard is one of the prank victims of Lily. He is oftenly being pranked, so sometimes he tries to bust her and Cat in their act. Due to Lily's obsession towards sharp things, Lily seemed to be interested on Picora's scythe.

As depicted by himself, Karl is a good friend of his. He understands Holt as a guy who get separated by their siblings, which somehow reminds him of his past. They oftenly chat together and make sure the camp is safe from threats and adversaries.

As shown in The Wizard and the Frog, Hazard respects Allie's abilities. They do not communicate much other then that. But they still are friends.

Before the glitch, Hazard was a college student. He moved out from his house so he can live close from his college. He moved to another town, but not long after he left, the harsh energy waves from the Machine (The Glitch) had hit his house. Nobody knows the exact location of the place, but he often moves back to the arc to protect the others.

Hazard with his glasses 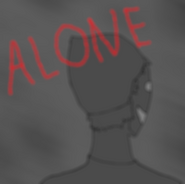 Picora as depicted by Order Soldier 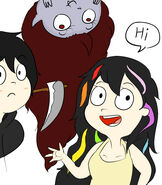