The Underground Bush-Road is the third short for the Camp Solace series.

Cat tries to find what exactly is in the camp’s bushes.

Kiri: What? Can dogs really fly to the m-

(There is rustling in a nearby bush)

Kiri: EEEP! (Sees 4 glowing eyes in the bush and curls up in a ball)

Alexis: (sigh) It's probably just a cat or dog or something. (Goes to check inside the bush)

Alexis: It's a note.

Alexis: It says, "You're the cooliest." Signed by F.

(Cat is hanging out with Lily outside)

Lily: And then I was I like "IF YOU DON'T GET THAT DOG OUTTA HERE, I'LL CHOP YOUR HE-

(Loud rustling in a bush)

Lily: Calm down! I'll go check it out. (Looks In the bush and finds a note)

Lily: What is this CRAZINESS?! (Throws the note to Cat)

Lily: Well, this is weird even for me. Well, I think it's time to hit the sack.

(Later Cat is seen in bed)

(More rustling in a bush)

Kiri: (Whispering) That's it. (Gets up and silently tiptoes to the door and goes outside)

Kiri: Hmmmm. (Looks inside the bush and there is no note)

(Something behind Cat bumps into her)

Kiri: Whoa! (Falls into a tunnel concealed by a blanket) Ow ow ow!

Kiri: Owwww. Ahg, I can't see anything. (Draws a lantern) Ah, much better.

(After about 30 seconds of searching, Cat starts to see light coming from ahead of her)

Kiri: Okay, this is getting strange. (Hears talking from one of the doors)

(Cat hesitates but then walks over to the door)

(Oda and Feron immediately turn to see who it is)

Feron: (Quickly puts his glasses in his pocket) Calm down, bro, it's just Cat.

Kiri: Could you please tell me WHAT THE HECK IS THIS PLACE?!

Oda: This is our base! (Starts wiggling his arms)

Feron: But you can't tell ANYONE.

Kiri: Were you guys the ones who scared the poop out of me by rustling in the bushes?

Oda: Oh, sorry about that. Feron had insisted that we search for cats in the bushes. (Rolls his eyes)

Kiri: Do you guys ever sleep?

Kiri: Ummm- (Looks at shelf of action figures on a wall) Whoa, that's a lot! I've only seen you with Yeehaw.

Kiri: When did you make this?

Feron: It all started when we thought the Parallelis dorms smelled like poo.

Feron Narrorating: Then we both got an idea.

Feron: We make an underground base!

Oda: (At the same time as Feron) We make a base on the moon!

Feron: It should be connected to all the bushes in the camp! Even one on the outside!

Feron Narrorating: And so we started digging. Using my speed mixed with Oda's "shovels", we got it done in no time.

(Oda's arms are taped to Feron's)

Feron: Are you READY?!

Feron Narrorating: It all took about 4 days.

Oda: And you're the only one who knows about it other than Feron and I.

Feron: So, what now?

Kiri: I kinda wanna go back to bed.

(About a minute later they are outside)

Oda & Feron: (Eyes are bloodshot again) GOODBYE, CAT. SLEEP WELL. (Dash back down into the bush)

Kiri: (Giggling silently) They are so weird. 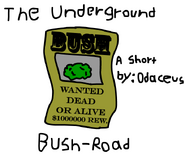