Troll Battle is the second episode in the first season of Camp Solace.

When Johnny provokes an army of trolls, they declare war on the camp.

(The episode starts out with Johnny sitting alone at a picnic table. There are a couple of trolls sitting at the picnic table in front of him, seemingly oblivious to his presence. Johnny is not at camp, but in an abandoned park about ten minutes away)

Johnny: (thinks to himself) Heh, I should totally go shoot a tiny fireball at that one over there. Everyone knows trolls are fireproof though, so it'll just annoy him. (laughs quietly)

(Johnny accurately shoots a tiny ball of blames at the largest troll. It turns around in rage, its eyes darkening)

Large Troll: YOU! YOU THERE! Did you throw that fire at me?

Johnny: (trying not to laugh) No...  I'm a human! Does it look like I could throw fire?

Large Troll: (scratches head and sniffs the air) No... you're not human. You don't smell human. You smell like fire. You threw fire at me! I am Lord Bunterclurckborg, king of the trolls! And what is your name, young fiery one?

Johnny: Uh... My name is Johnny... but everyone calls me Hazard. (he tries again not to burst out laughing)

Lord Bunterclurckborg: I can see why they call you Hazard. And where do you hail from?

Johnny: Camp Solace. It's about ten minutes thataway. (points towards the camp) You know, you can come to camp and feel free to uh, like ask for Hazard. Sometimes I wear black and look different. Then beat him... I mean me... up! (Johnny has an evil grin on his face)

Lord Bunterclurckborg: (looks confused and angry) Yes well, we (gestures towards the rest of the trolls, who are sitting there, some of them picking their noses, others playing cards) declare war on this Camp Solace! You have provoked us, young fire one, and we will not rest until your home is crushed to the ground! My army and I will see you at 4:30 for battle. Until then, do not be fooled. Trolls are ruthless beings. You and your friends are in grave danger. Have a great afternoon! (waves cheerily, and the trolls all walk down the hill, away from the camp, presumably to arm themselves)

(Johnny uses his super-speed to sprint back to camp. He skids breathlessly to a halt in front of the main office and knocks on the door. Travis tells him to come in)

Johnny:  (Gasping) Travis... troll... war... (he puts his hands on his knees and leans forward as he struggles for breath)

Travis: Whoa whoa. Calm down and slow down. What's this about a troll?

(Johnny breathlessly tells him the whole story leaving out the part about calling himself Hazard, and Travis narrows his eyes)

Johnny: (Slightly scared inside but not showing it) What? Give me mess hall duty for a month? Take away my desert?

Travis: Well, those are both extraordinary ideas, but no. I'm going to teach you a lesson about teamwork and cooperation. The rest of camp is going to go on a little field trip to the lake, the clean one not the one that's infused with nuclear waste. But you and your "arc" are going to stay here and fight the trolls. All of the camp's armory is up for your usage, but you have to clean up and rebuild any of the camp that gets destroyed. You have to learn that you aren't the only one who pays for your actions. Your friends do too.

Johnny: (eyes wide) You... can't do that! It isn't fair. How are we supposed to fight an army of trolls?! There are five of us... and probably three dozen of them.

Travis: (shrugs) That's not for me to figure out. Besides, you have a bit of magic on your side, don't you? It's not really good magic, but it's still something. I would go arm yourselves if i were you. Didn't you say they'd be here at 4:30? That's only an hour and a half away. (Travis goes outside, and gathers the rest of the camp to go on the outing. Johnny stands in his office, dumbstruck, for a few minutes, before racing over to his arc's cabins and pounds on their doors)

Kiri: (opening her and Arria's cabin door) What is it Johnny? And where's everyone else? (She glances around the deserted camp. Arria comes to the door and stands next to Cat, her arms crossed)

Johnny: I'll explain when the others come out here. (Slowly, Hazard comes sulkily out of one cabin, and Lily comes bouncing out of another, brushing her hair)

Hazard: So, what's so important you had to interrupt my te- (he breaks off) my... stuff for?

(Johnny raises an eyebrow but doesn't say anything about it. He then proceeds to explain the situation for the second time, again leaving out the part about saying his name was Hazard)

Arria:  Well, it isn't that bad. It was a mistake, it's okay Johnny.

Kiri: It's cool. I finally get a chance to be Hermione! (Inside, Cat is upset, but she knows a good leader doesn't get mad at her team)

Lily: Yay! Pointy weapons! I- (she is cut off by Hazard)

Hazard: (cutting off Lily) Well wait a second. Why should I help you? Travis isn't here, there isn't anyone here that's going to make me fight. I could just lounge around in my cabin and watch you get obliterated.

Kiri: (Glaring at Hazard) We need everyone. This is a hero's duty. Come on Hazard.

Hazard: (sighs) Fine fine. But only because the camp needs protection.

(The gang heads towards the armory to stock up on weapons)

Johnny: I don't need weapons. I got my powers. (summons a ball of fire in his hand)

Hazard: You idiot, trolls are fireproof. You said so yourself.

Johnny: (scratches his face with the fire still on his hands) Oops.

Hazard: (smirks) Well, I guess you're a troll then. Hurry everyone, kill it with water!

Kiri: (exasperated sigh) Come on you two! We only have an hour!

Arria: Huh. Most of this stuff won't be useful against trolls. They have armor-like skin already, plus they'll be wearing armor. The trick to fighting trolls isn't to use large weapons like axes or swords, they'll be using those already. We need to arm ourselves with small, precise weapons that will find chicks in their armor, like throwing stars, daggers, bow and arrows, or javelins.

(The group stares at Arria in shock)

Arria: (blushing) What? I know some stuff. I'm not all stupid.

Kiri: She's right. Everyone, grab a weapon you can use efficiently.

Kiri: I knew these would come in handy. They can draw blood just by poking somebody.

Lily: Come on guys. Let's go wait for them.

(a half an hour later, an army of about twenty-five trolls come marching into camp. They meet Johnny and the others in an open stretch of land)

Lord Bunterclurckborg: Is this where we shall battle, Hazard? (Johnny blushes, and Hazard looks very confused) I see you have quite a small army. For such a large camp, I thought there might be a more challenging opponent. (smirks) After we have conquered you, we will destroy the rest of your precious camp.

Lord Bunterclurckborg: No matter who is who. Let us commence in battle! (the trolls all draw their weapons, which are large axes, broadswords, and huge clubs. The members of Dissideffor also wield their weapons)

Arria: (hisses out of the corner of her mouth) Now remember what I told you!

(The trolls and campers begin battling. Cat uses her sharp pencils to stab a troll in the chink in his armor in his armpit, and he goes down bleeding. She then whips around and pokes another in the face, and he goes down as well. Meanwhile, Johnny is precisely aiming his arrows at trolls' knees and feet, and is having great success. Arria is whipping her throwing stars in every direction, taking trolls down everywhere. Hazard is fighting scythe-to-sword with a large troll, and seems to be struggling. Lily is attempting to get trolls with her dagger, but she is having trouble because she is dodging ax blows and club swings. Johnny is turned around to fire an arrow at a troll, but another sneaks up behind him and slashes at him with an ax. He jumps out of the way at the last second, and nearly misses being decapitated. Hazard is nearly being beaten by the troll with the sword, and is now on the defensive. Arria has run out of throwing stars, and is flying around, trying to kick trolls in the face, with little success. A troll slashes at Cat, and ends up cutting off the tip of one of her pencils, leaving her with only one weapon. There are still about twenty trolls up, and the campers are all looking slightly weary)

Lord Bunterclurkborg: (who isn't really fighting at all) Well, puny children, it seems as though you are being beaten. Soon we will be victorious!

Kiri: Guys! It's no use. We're mostly out of weapons.

Lily: I saw this in a movie once. We have to combine abilities guys. You know, like, be a team. I call being cheerleader!

Arria: Lily that's actually a really good idea! Well, minus the cheerleader part. (Ducks out of the way from a troll swinging a club at her)

Johnny: Hey! I have an idea. Trolls are fireproof... but armor isn't! (he hurls two fireballs at a troll's armor, and it begins to melt. The troll starts running in circles and screaming. He repeats the process with several other trolls)

(Cat runs over to Arria, and stabs the troll with the club in the eye with her remaining pencil. His hands shoot up to his eye, clutching it and moaning in pain, and he drops his club. Arria picks up the club and smashes it over his head, knocking him out.

Kiri: (giggling) Hey! That's my thing. (the two high-five and run off to double-team another troll)

(After Johnny burns the armor off of the trolls, Lily and Hazard run over to them, and attack their bare flesh with their dagger and scythe. The friends keep teaming up to attack for about five more minutes, until there are only three trolls standing, one of them being Lord Bunterclurckborg)

Lord Bunterclurckborg: No! This is impossible! My army cannot have been beaten by a bunch of puny, weak, arguing, children! (he glares at the members of Dissideffor, who are standing proudly, albeit beat up, in front of him. He sighs) Well, I suppose you have won fairly. The trolls shall leave your camp alone... for now. (The remaining trolls gather their fallen comrades on their shoulders, and those who can stand up do so. They retreat from camp)

Johnny: Yeah! We did it! We beat the trolls! (He starts dancing around and shaking his butt)

(The screen jumps to a few hours later, where the gang, now cleaned up, are gathered in Travis's office)

Travis: Congratulations, you have proven yourselves worthy, in stepping up to help your friend and working together to defeat the enemy. For this, I will only give you two week's Mess Hall duty instead of five.

(The campers groan in unison, Travis laughs cheerfully, and the screen fades to black) 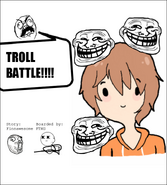